Club Josephina has had a colourful and varied history, beginning life on 21 July 2007 in the mainland region of Gula (and neighbouring Zoshchenko).

In April 2008, the club relocated to its own private region, Postcard From Utopia, where it remained until its sale in April 2009.

The club then relocated to the mainland region of Trueblood, where it remained until May 2011. By this point, Club Josephina had been in the Destination Guide since March 2011.

From May 2011 until October 2015, Club Josephina was located in mainland Annapurna.

From October 2015 until March 2017, Club Josephina was located in the mountainous coastal region of Mondrian.

In March 2017, Club Josephina moved to the coastal private estate of Charmed. This land entered the destination guide but when the opportunity arose, following success at auction, for the club to acquire multiple parcels of land in the iconic regions of Bay City in May 2017, a return to our mainland roots happened.  In August 2017, the club moved back to Gula.

In October 2017, the club relocated to the mainland coastal region of Danpoon until December 2017, when the mainland region of Caesar was successfully acquired at auction and the club moved again.

In April 2018, the club relocated to Bay City Argos and was there until May 2019 when it relocated to the mainland canalside region of Emmelia. 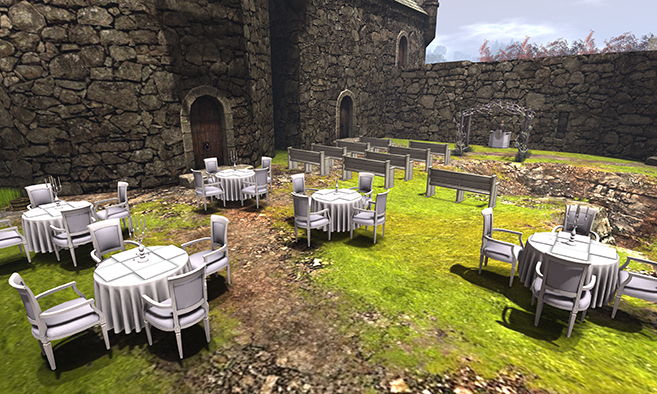 Emmelia Weddings in Emmelia Country Park offers wedding venues with a small fee, and an automated minister. There are multiple venues available, including a stunning castle. With gardens to explore and cafes to hang out, there is no shortage of places to enjoy the wedding, reception, and honeymoon.

Visit in Second Life
Scroll back to top